Located in London’s West End, Bloomsbury is a fashionable residential area that still retains some of its bohemian character. The streets and squares were developed in the late 18th Century and Bedford Square (a few minutes walk from the Jesmond Hotel) is the only Georgian square in London that remains untouched on all four sides. This very prestigious neighbourhood is just minutes away on foot from the West End’s Theatreland, Soho and Covent Garden.

The Jesmond Hotel is located in the heart of the Bloomsbury area of central London on Gower Street. Gower Street runs from Euston in the north to Oxford Street in the south. With the postal code of West Central One (WC1) the Jesmond Hotel is within 5 minutes walk of The British Museum, Oxford Street, (the main shopping district) and Shaftesbury Avenue, the central area of London’s Theatreland.

Surrounded by the University of London (UCL) campus and University College Hospital (UCH), the area is clean, safe, and friendly. Due to our central location most places you will wish to visit are easily accessible on foot from the Jesmond Hotel, or there are a number of excellent public transport connections available.

The nearest London Underground (the Tube) stations are;

The 24, 29, 73, 390 bus routes stop along Tottenham Court Road and these routes serve nearly all destinations that you would want to visit.

By Underground the Metropolitan line to Euston Square (directions from this station above) or a 20 minute walk directly to the hotel. Turn right outside Kings Cross St. Pancras, and walk west along the main Euston Road in the direction of Euston. Gower Street is a left turn as the road becomes an underpass at a main intersection. UCH hospital on the corner identifies Gower Street. There are also London Taxis available outside Kings Cross/St. Pancras stations.

By Underground the Piccadilly line serves Heathrow (to Russell Square or Leicester Square, both a 15 minute walk from the Jesmond Hotel), with trains running every few minutes from early morning to late evening; the journey time being around 50 minutes. By Heathrow Express between Paddington station (also on the Hammersmith & City Line) and Heathrow, trains depart every 15 minutes with a journey time of approximately 15 minutes.

Southern and Gatwick Express rail services run direct into Victoria (also on the Victoria line), the journey time being approximately 35 minutes. There is also a Thameslink rail service that runs into Kings Cross/St. Pancras, Farringdon, Blackfriars and London Bridge Stations.

By Stansted Express train service directly into Liverpool Street Station (also on the Metropolitan, Hammersmith & City and Circle lines). This service runs every 30 minutes and the journey time is approximately 40 minutes.

Other forms of transport:

There are many coach services to and from the London airports, and also from most major cities throughout the UK, the majority of which arrive into London Victoria Coach Station. Visit London's website has a useful page on the many coach service providers. 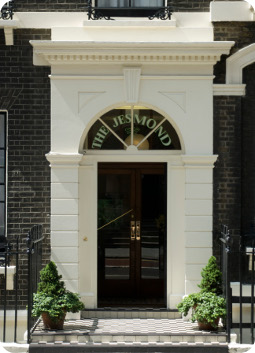 We are open! Your health and safety is our priority. Read how we are keeping our staff and guests safe. If you are travelling from outside of the UK please ensure you read the UK Government's Guide to entering the UK